OneChristianMan and Flesh Tamers Fitness Life,Politics,Work Leadership and the manager

Leadership and the manager

Becoming a manager is sometimes tough, but gaining the mantle of Leadership is the part that requires real work. I have had many managers in my 11 years here and a few of them never were able to become true leaders of the team. They used their authority to get things done, but the grumbling on the aisle denoted that there was not a desire to adapt to the change. Leaders they were not.

You have to let the team put the mantle of leadership on you. How? Well, in my experience, you have to first be part of the team’s struggle. Relationships form and teams solidify in the midst of shared struggle or goals. There is no shame in helping your team complete a task and sharing in the struggle to complete it. When they see you working and trying and not being too important to do the work they do, then you can start showing the qualities of leadership that you want them to see in you. You don’t  have to be good at it. Just the act of trying to help is enough. Don’t take over, surely, but be a part of the struggle. Then, you can begin to capture the hearts of those who you have positional authority over.

The leader will take time to understand the work and build the relationship before ever giving the first instruction for change. Understandably, this isn’t always a quick turnaround time.

Sometimes the mantle of leadership will fall on your shoulders even when you didn’t want it. It just seems to inherently follow you around because of the way your work or because a vacuum has been created due to someone leaving. Sometimes the best leaders are the ones who didn’t want to lead in the first place. Maybe they are not necessarily well polished in their speech or appearance, but they have earned respect and confidence from the team through the shared struggle. New managers should lean on these people to help push change, and even continue still after the manager has become a leader on the team. 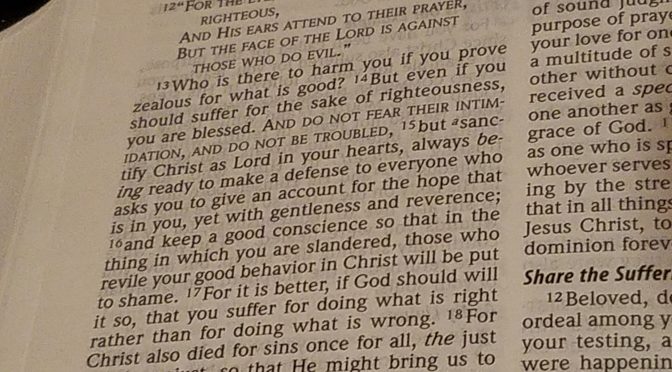 At that time many will fall away and will betray one another and hate one another. Many false prophets will arise and will mislead many. Because lawlessness is increased, most

I’m reading Romans 5 & 6 today (NIV version). Sometimes when I read the Bible I read it in my mind as though the words are being spoken by a