Categories:
Have you seen the stories lately about the return of the Biblical plagues? There are always a few fantastic stories and possible “signs” that the second coming is nigh at hand (fancy word alert). Yet, the Lord still waits for His appointed time and His mercy ever flowing allows more people to come to the knowledge of Jesus.

Since the plagues are in the news let’s take a quick high level look at the reason for the original Biblical plagues in the first place.

The plagues as recorded in the Old Testament (Genesis 7-12) were sent by God as a sign that He was the one true God and to secure the freedom of the Israelites who were crying out for salvation. Counter to the Egyptian belief in many gods and that Pharaoh himself was a god, these plagues were to prove Yahweh’s power and supremacy to both the Egyptians and to the Israelites.

Old Testament Egypt worshiped gods that they believed could control the water, the sun, death and other things. Through these plagues, Yahweh was showing Pharaoh, the Egyptians and the Israelites that He was the only one true God who controlled all things.

Although the first nine plagues seemed random if not odd, each plague pointed to Yahweh’s power over Egypt’s fake gods.

However, in the tenth plague we can see the saving grace of God for those who trust in Him and have faith to act on His commands. The blood of the lamb secured the safety and life of the first born children of those families who proved faithful to believe and act.

This tenth plague would secure the freedom of Jacob’s (Israel’s) descendents and allow them to worship their God on their journey to the promised land. But those families in Egypt who did not obey God’s command, of sacrifice and covering the doorway of their home with the blood from that sacrifice, suffered the death of their first born sons.

In Egypt the Israelites, as instructed, selected a lamb as a sacrifice for the salvation of their first born children. But about 2000 years ago, God provided a perfect and eternal sacrifice to cover all sins and to save us from all the plagues of punishment we deserve for our sins. Just like Pharaoh our continual sin problem stems from our stubborn and hard-heart. Yet still today our faith in the lamb of God, Jesus Christ, and the blood He shed, has saved us from death by grace. (Ephesians 2:8-9)

“Thus says the Lord , your Redeemer, the Holy One of Israel, “I am the Lord your God, who teaches you to profit, Who leads you in the way you

“But if any of you lacks wisdom, let him ask of God, who gives to all generously and without reproach, and it will be given to him.” James 1:5 NASB 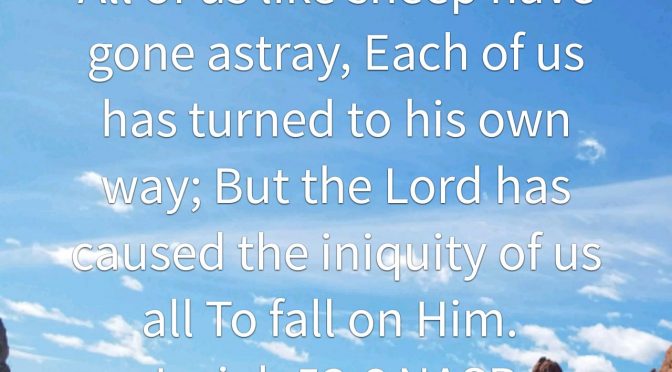